Pascal Siakam was the 27th pick in the NBA draft only four years ago. He was a raw talent, who had only played basketball for about six years. These are the type of players who can be harbouring untapped potential and achieve major improvements, or they are a swing and a miss who is out of the league in just a few years. Siakam has already clearly shown to be the former. In year one, he was a decent defender who brought almost nothing to the table on offence. Year two, he became a valuable piece on arguably the best bench unit in the entire league. His third season, he was the league’s most improved player and the second/third option on a championship team. Last season, he was an All-Star starter and named to the second All-NBA team, leading the Toronto Raptors to a 60 win pace.

Undoubtedly, it has been a strange and abbreviated offseason. Siakams growth in his first four seasons has been due to putting in serious work during the summers. This offseason has been the shortest offseason of Siakams career. He is unable to get his well-documented Rico Hines training in with the border restrictions in place. Since Siakam is not as polished as other NBA players, who have been playing basketball their whole lives, he showed signs of rust once the season resumed in Orlando. Despite this, there is reason to be optimistic that Siakam has been working on improvements since the season ended for the Raptors in September. Let’s take a look at some areas we could see improvement.

The most significant improvement last season from Siakam was his three-point shooting from above the break. In 2018-2019 Siakam improved his three pointer significantly from the previous season from 22% to 37%. He also increased his attempts per game by nearly double from 1.6 to 2.7. At this time, he was mainly shooting open corner threes – often as the beneficiary of a drive and kick or a good ball movement on the perimeter. Last season, his percentage was slightly down from 37% to 36%; however, the growth was even more impressive. Siakam was finding his own shot, shooting off the dribble threes from above the break, and taking 6.1 attempts per game.

Despite the already insane growth, it is likely that Siakam will continue to improve this part of his game for the upcoming season. This has clearly been a main point of emphasis for Siakams improvement. Raptors fans should appreciate three-point shot improvements like this even more after watching Demar DeRozen fail to ever accomplish this skill. The amount that Siakam has improved his shot is coming at an unprecedented rate. It compares to no other player in league history.

Concerningly, Siakam has shown tendencies to have his three-pointer disappear in the playoffs. In 2019, he dropped to 28%, and in the Orlando bubble playoffs he plummeted to just 19%. The main thing Siakam needs to work on is consistency with his three. As brilliant as it looked at time during the regular season, many of Siakams shots were ill-advised and missed badly. The consistency will likely come with time and continued work. If he is able to pick his spots and become more consistent, Siakam has the ability to shoot 7-8 threes per game and hit close to 40% of them. However, the main improvement will be doing it with playoff level intensity.

We all know and love Siakams infamous spin move. He showed shades of it during his second season with the Raptors, but it was during his most improved 2018-2019 season that it had become his signature move. It seemed like no player in the league could defend it for a while. Siakams finishing close to the rim was elite, at 67% from within five feet. The first time that we saw a defender lock this move down, was Joel Embiid in the 2019 second round. He was big enough to body Siakam and force him into outside shots. In this year’s playoffs, we saw Jaylen Brown and Marcus Smart sit on the spin move and swipe it away before he could get the ball up to the rim.

Siakam has multiple areas to improve with this part of his game. First, he needs to improve as a face-up threat. We saw Siakam develop a mid-range shot this year, and it was respectable. He shot 36.7% from five to nine feet, and 32% from ten to fifteen feet. Those numbers aren’t amazing but for a player who had never featured these shots, it was a promising start. If Siakam can become an above 40% threat from these ranges it will do wonders for his game. This will allow Siakam to have more isolation plays where he can expose shorter defenders (like Marcus Smart) who are waiting for Siakam to put the ball on the floor. If teams decide to go with smaller strong guards to defend Siakam, he can simply shoot over them.

A second improvement for Siakam is to identify double teams. As noted above, the Siakam spin move is a well-documented signature around the NBA. Often, he will get a mismatch with a poor defender, back them down, and spin right into a second defender who was reading this play. Siakam needs to a) be quicker when hunting these matchups, and b) be aware if a second player cheats to meet him on the spin. If Siakam can have the awareness to identify the help defender, that will likely mean that one of his teammates will be open for a three, or a back-door layup. This will drive his assist total upwards, lower his turnovers, as well as limit the amount of doubles he receives. He showed the ability to pass out of double teams last year, but not anywhere near the elite level of the Giannis Antetokounmpos of the world.

Looking at Siakam in his rookie season, it is unfathomable to think that he could ever be a primary ball-handler. But here we are now. Last season, Point Pascal was officially born. We saw Siakam carry the ball up the floor, create looks for himself, and initiate the offence. Of course he was not the main ball handler on the team, but he took many possessions. The problem with Point Pascal is that his handle isn’t quite good enough to be a lead ball handler.

At the beginning of the season, we saw more of Siakam initiating the offence. The turnovers became a bit of a problem and the season of Point Pascal never came to its full potential. Siakam is a decent catch and shoot player, as well as an elite off-ball cutter. Being the primary ball handler for the team is not necessary, but there are plenty of other reasons that improving his handle would benefit his game. First, it would allow Siakam to run the pink-and-roll which could create all sorts of chaos for slower players who try to guard Siakam at the top of the break. Imagine Siakam running a Lowry-esque pick and roll with Serge Ibaka. As good as Lowry is at getting to the rim if the defenders over help on Serge, Siakam would be even more deadly. He is already a good passer (although improvement will help) but the threat that he would present on the drive could be a very difficult matchup for his opponents.

The main reason that a tighter handler would benefit Siakam is his ability to blow by defenders. He is so quick and athletic, that if he had a quick first dribble he would be able to get to the paint at will. We saw it with Jayson Tatum and Kemba Walker these playoffs. When the Celtics got the match ups they wanted on switches, the Raptors were in scramble mode. They would blow by their man up top, either have a layup/dunk, or have the Raptors help defence leave wide open corner threes. Kemba was good, but seeing a guy like Tatum do it at his size is truly different. Siakam has the speed and athleticism to do this, it’s just the handle that needs work. We’ve seen Siakam get himself tangled up in the situations. If he can improve this skill, the benefits for the rest of the team will be significant. 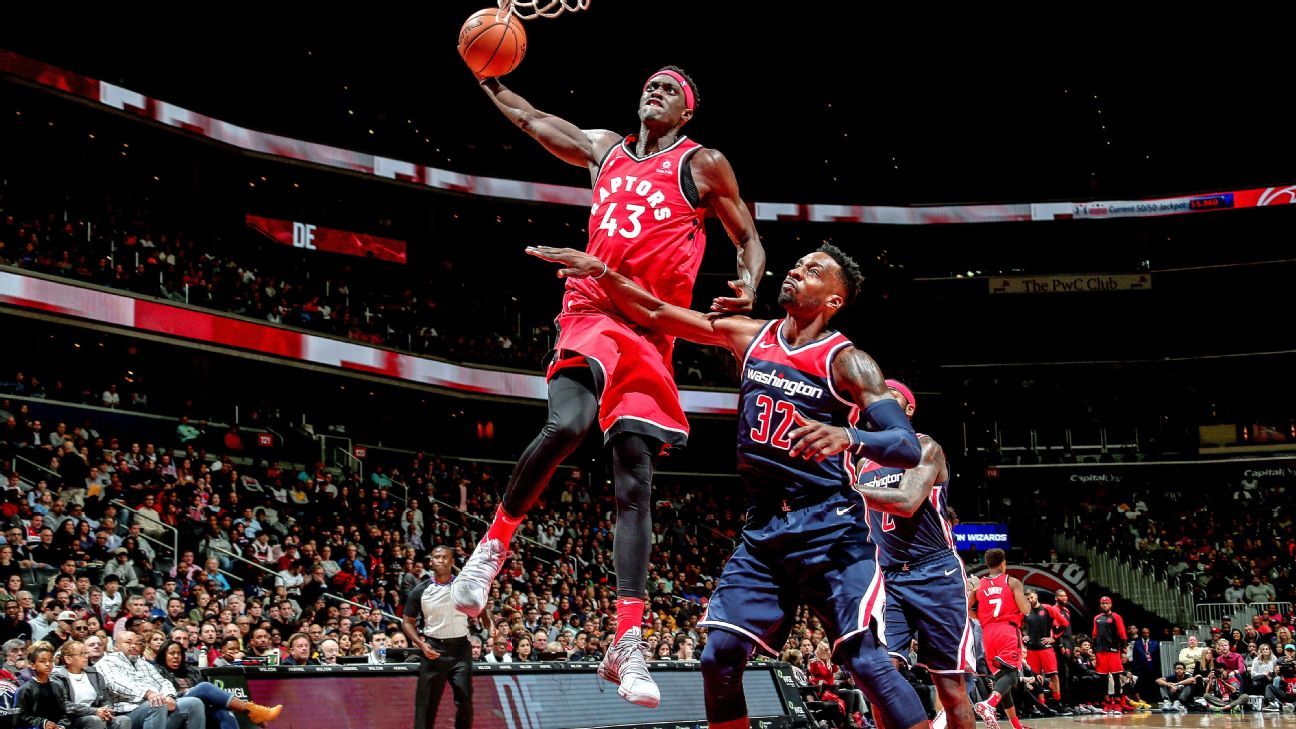 The new and (even more) improved, Pascal Siakam

I want to be clear here. Pascal Siakam is an awesome basketball player. He is a deserving All-Star and has blown away and realistic expectations from being the 27th pick in 2016. As is, Siakam has already proven that he can be the second or third option on a championship team. That alone signals that he is worth every penny of the max contract that he was given by the Raptors. We have grown to have unreasonable expectations for a player that has given us far more than we could’ve ever imagined. But still, we speculate and believe that Siakam can make major improvements every year until he doesn’t.

Let’s remember he is 26 years old, but in terms of learning curves, he has played a lot less basketball than other players his age. This past year was a huge year for Siakams final-product. He, and the Raptors, had the choice of whether he should develop into a Giannis-lite, post-dominate, back to the basket player, or a more rangey wing player like we see today. Siakam still has Giannis-lite traits, but I think the right call was made with this trajectory. There is the possibility that could add some more size, but his speed and shooting are very crucial skills to have in today’s game.

If Siakam can continue his unprecedented growth into this season, all of these improvements are reasonable. Totally unfair, but reasonable by his standards. He has gone from an unknown rookie, to a bench star, to the Most Improved Player, to a second team All-NBA player. The next step would be to become a Most Valuable Player candidate. If Siakam can hit these goals, he will be at this level. That is a player who could be the best player on a champion, but would likely need to be paired with another similar caliber player. In today’s league, most teams have two stars and he could be one of them for Toronto.

https://embed.sendtonews.com/player2/embedcode.php?SC=ODQ8dLM6yv-479079-8816&autoplay=on&sound=off After suffering a terrifying tumble against the Trail Blazers and missing Sunday’s match-up with the Nuggets, Pascal Siakam made his return to the lineup and was very much needed for the comeback win against the Pacers on Wednesday. Indiana – like most teams this season – had no answer for him. Siakam finished the … Read more

After another demoralizing sweep at the hands of the Cleveland Cavaliers, many are writing the Raptors off for good labelling this season as their chance to prove their worth. Unfortunately, this series could have taken a different turn if game one and three ended differently, but the Raptors had absolutely no answer for LeBron and … Read more