Vince Carter, Bismack Biyombo, and Other Free Agents The Raptors Should Target If Kawhi Re-Signs

It’s the evening of July 3rd. You’re sitting in front of the TV playing 2K, getting ready for Summer League like the rest of us. You get a text, then 50 more. You check Twitter. WOJ BOMB! He stay! You had somewhat expected it, after seeing that he bought a house in Toronto, signed up for a Nexus pass, and wore a Blue Jays jersey in Barbados, but it still shocked your system.

While you, I, and the rest of Toronto, run outside to scream his name, Masai and Bobby have known for a couple hours, and are getting back to work. With much less than zero cap room remaining, it’s time to get to work. The only player that the Raptors can sign for more than the minimum is Danny Green, as they hold his bird rights, so the rest of the roster will have to be guys on minimum contracts. As of right now, the depth chart looks like this:

In all honesty, this is not a poor 10 man rotation at all, however the CBA requires a team to have at least 13 players under contract. Raptors fans are used to signing players to minimum contracts out of the G League, or from overseas – guys who would not have had a shot at the NBA if we weren’t the ones to give it to them.

As a defending champ, it’s a whole lot different in that market. Look at Golden State over the past 5 years, or the Miami Heat for the 4 years before that. Both teams would consistently get good NBA veterans who would have commanded much more than a minimum contract on the open market, but chose to take less money to play with a championship team (eg. Norris Cole, Mario Chalmers, Ray Allen, Shane Battier, David West, Javale McGee, Omri Casspi, etc.) These are the “ring chaser” type of players that the Raptors can sign to the back end of their roster to fill out the rotation, and be a whole lot deeper than the 7 man unit we struggled with at times this past postseason. Here are a few names that are on the market this year for us to look at: 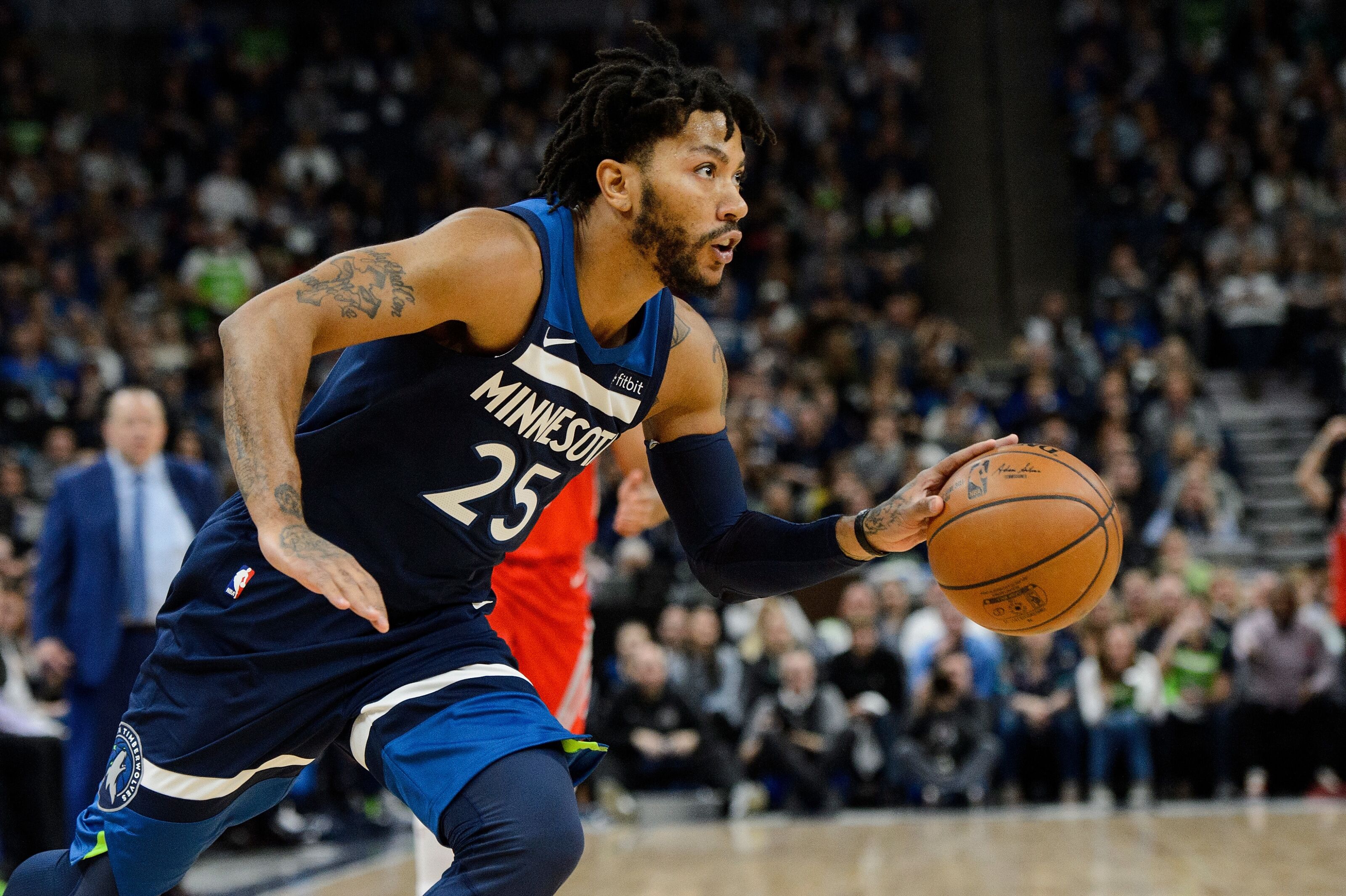 At 30 years old, the former MVP does not look like he will ever revive himself to become the player he once was. He showed a flash of brilliance earlier this season with the Timberwolves, dropping 51 in a game, and showing a mix of emotions afterwards. After bouncing around from New York, to Cleveland, to Minnesota, he may be looking for a place where he can contend, and be a part of something bigger. The Raptors cannot offer him the minutes that other teams can, but they can offer a shot for the legend, and future Hall of Famer, to get a ring on his finger. His capabilities are way beyond that of any third string point guard, coming off averages of 18.0 points, 4.3 assists, and 2.7 rebounds per game last season, so Nurse could look to run a two point guard lineup with him and either Lowry or VanVleet together on the floor at times. I wouldn’t call the scenario of Rose coming North of the border likely, however it is certainly not out of question, and would not surprise me if it happened.

Assuming Danny Green re-signs, I would still expect him to start at shooting guard, leaving Redick with some good minutes off the bench. Essentially any team in the league would love to have a deadeye like Redick, but the journeyman has been all around the league at this point in his career. He doesn’t seem like he’s searching for the biggest, or longest contract at 35 years old, but might be looking for a ring, after coming close with the Magic 10 years ago. He’s much more than a guy to tag along for the ride, as he is still one of the premier catch-and-shoot players in the league, having shot 39.7% from deep last year. This would push Norman Powell into a lesser role, to the point where he could be on the trade block to help save some of the tax bill for Larry Tannenbaum and company. With Philadelphia focused on Tobias Harris and Jimmy Butler, or possibly even a deal that would land PJ Tucker and Eric Gordon in The City of Brotherly Love, they do not seem to have Redick as a priority. If Masai and Bobby are aggressive in their pursuit of Redick, I would give the idea of him donning the red and black of the dinos a good chance of happening.

A former Raptor, and former teammate of both Kyle Lowry and Kawhi Leonard, the soon-to-be 33-year-old forward is past his hay day, but can still hoop. Though Derozan is Lowry’s best friend, it’s actually Rudy Gay who is Lowry’s kids’ godfather. The two have a great relationship that dates back to their time together in Memphis, and even previously in high school. Under Popovich last season as the third option on the Spurs, Gay shot a blistering career high 53.7% from the field. In a role with the Raptors, he would play minutes as a combo forward, and poses an intriguing offensive threat as a slasher between Gasol and Kawhi. He also provides great spacing that Siakam and Anunoby somewhat lack, having shot over 40% from deep last season. Barring great improvement from Chris Boucher, Gay would likely see upwards of 18 minutes a game next season, which is approximately what any other contending team could offer him. One other aspect to him coming would be for him to provide great mentorship to OG Anunoby – someone with a similar skillset to what he had at that age, with the same body type.

Though he is not available yet, the Nuggets are expected to decline his $30M team option for next year, making him an unrestricted free agent. The Raptors have previously been a team rumoured to be hunting for Paul Millsap while he was in his last year in Atlanta, before Ujiri went the other way and traded for Ibaka instead. Millsap is a very unselfish player, and can be plugged in almost anywhere in the league. In the words of DeMarre Carroll, a former teammate of Millsap, “Paul is the most unselfish all-star you probably will ever find.” The former all-star was still productive last year as he saw the least minutes of his career since his sophomore season, averaging 12.6 points, 7.2 rebounds, and 2.0 assists. He should fit in seamlessly next to Gasol, after playing 2 seasons next to who is essentially a young version of Gasol, in Nikola Jokic. Having made the playoffs 10 out of his 13 seasons and never advancing to The Finals, the 34-year-old may be looking to finally find some glory in a slightly diminished role. Three full years after he played his lone season as a Raptor, he is still one of my all-time favourites. Biyombo is a guy who gives your team energy and effort every single time he steps on the floor. He is coming off a season in Charlotte where he averaged 4.4 points, and 4.6 rebounds in only 54 contests, but he still has the ability to help any team he goes to. Though his range doesn’t extend much beyond 5 feet from the basket, he is a strong defensive presence, and a monster on the glass. He still holds the Raptors’ record for rebounds in a playoff game with 26, set during Game 3 against the Cavaliers in 2016. In a potential return to Toronto, he would likely just serve as an injury insurance player behind Gasol and Ibaka, however his benefit off the floor, and in the locker room would be invaluable. He is not worth too much more than a minimum contract on the open market anyways, and it would be great to see a Raptors legend return home. Speaking of Raptor legends, this article would not be complete without some fan fiction. Imagine this: The Raptors are up 14 in Game 7 of the 2020 NBA Finals with 9 seconds left in the fourth. Nick Nurse calls a timeout. As the team huddle breaks apart and emotions are running rampant throughout the Scotiabank Arena, Herby Kuhn hops on the mic. “Ladies and gentlemen, subbing in for Kawhi Leonard, is Vince…. CAAAARTER!” The stadium erupts as Vinsanity checks in for his first ever look at the NBA Finals. He recently announced that this season, his 22nd, will be his last. To give some perspective, Carter’s NBA career is just three years younger than the Raptors’ franchise existence. To see the man who put our city on the map, and the reason that basketball in Toronto still exists and didn’t flame out as it did in Vancouver, win a ring in the place where it all started, would be surreal. It has long been rumoured that he would someday return to Toronto before he retires, and yet every year he goes to a different garbage team that can offer him more minutes. When Masai was asked at his press conference a couple of days ago if a Vince return was possible, he brushed it off, claiming that of course, Kawhi is the team’s first priority in free agency, but that Vince would one day be in the rafters at Scotiabank Arena. Vince, you can be on the floor too. It’s time to come home.