The Early Signs Of Bench Mob 2.0

Remember back in the 2017-2018 season, when the Toronto Raptors were led by best friends DeMar DeRozan and Kyle Lowry, had Dwane Casey at the helm of the team, and the narrative going into the playoffs was that “we didn’t need a third superstar to finally compete with LeBron James, because our sensational bench of young misfits was enough to lead us to The Finals?”

Me too, and while those playoffs ended like every other year in a loss to The King, we weren’t wrong in thinking what we did. Our Bench Mob comprised of Fred VanVleet, Delon Wright, C.J. Miles, Pascal Siakam, and Jakob Poeltl outscored opponents by a considerable 17.0 points per 100 possessions – the best bench unit in the league by a longshot. They would often break games open by the beginning of the second quarter, not only just whipping opponents’ benches, but they outplayed opposing second units so thoroughly that they forced their starters to sub back in early, and then buried them too.

The Bench Mob wasn’t filled with talent (keep in mind that Siakam and VanVleet were a fraction of the players that they are now), but the sheer energy they brought to the game every time they stepped on the floor made it feel like these 5 were best friends going to the park on the weekend to run some oldheads off the court for their money. VanVleet’s leadership and hustle, Delon’s playmaking ability and perimeter defense, Miles’ marksmanship, Siakam’s length and athleticism, and Poeltl’s rebounding and interior defense were all perfect compliments to each other, and with the way that this group moved the ball, you would think that coach Casey told them everyone needs a touch before they take a shot.

In basketball, you can stop one superstar with whatever double team you send at them, forcing them to defer to teammates, and hoping that role players miss open shots. You can’t stop a 5 man unit that is just faster, smarter, and is more willing to outwork and out-hustle anyone in front of them though, right? Wrong. That rationale lasted all of 10 games past mid-April.

Since then, the Raptors’ bench has been one of their greatest weaknesses. Past the second round of last year’s championship run, Nick Nurse was reluctant to use anyone beyond the 8th man on his bench, which was nearly the downfall of Masai Ujiri’s masterplan. Fatigue was showing, and injuries were mounting for the team. Kawhi Leonard was playing over 39 minutes per game with his chronic quad injury, and Kyle Lowry was playing over 37 minutes per game with ligament damage in his thumb. Luckily, they cut a game off the end of their schedule by winning the Larry OB in all of 6 games in The Finals, but that didn’t compensate for the fact that such a tight rotation wouldn’t get the job done moving forward.

Understandably so, after Kawhi Leonard went home, depth was the facet of the roster that Masai Ujiri and company decided to focus on first. Matt Thomas, Terence Davis Jr., Rondae Hollis-Jefferson, and Stanley Johnson were all signed in the days following Leonard’s departure, giving Nick Nurse some options as to who he could build into his rotation alongside the 7 core guys remaining from last season’s championship squad.

Nick Nurse was vocal over his discontent with the new Raptors after the first few days of training camp, calling out Rondae Hollis-Jefferson and Stanley Johnson specifically for “not understanding [the culture]”.

Whether this public call-out was Nurse’s ploy to get his new additions to work harder, or if he had genuine disinterest in giving them any opportunity to play because of his perceived work ethic of them, his words seemed to his the sweet spot for Rondae.

I wrote earlier about how the injuries to Ibaka, Lowry, and thereafter Anunoby could represent an opportunity for other players. Similarly to how Siakam, VanVleet, and Anunoby found their footing as a product of injuries to Jared Sullinger, Cory Joseph, and Norman Powell, respectively, the current situation could offer much of the same.

It’s been a small sample size, but hopefully by the end of the year we’ll be able to view Chris Boucher’s, Terence Davis Jr.’s, and Rondae Hollis-Jefferson’s consistent productivity as a result of the minutes that were made available from these bumps and bruises along the way. 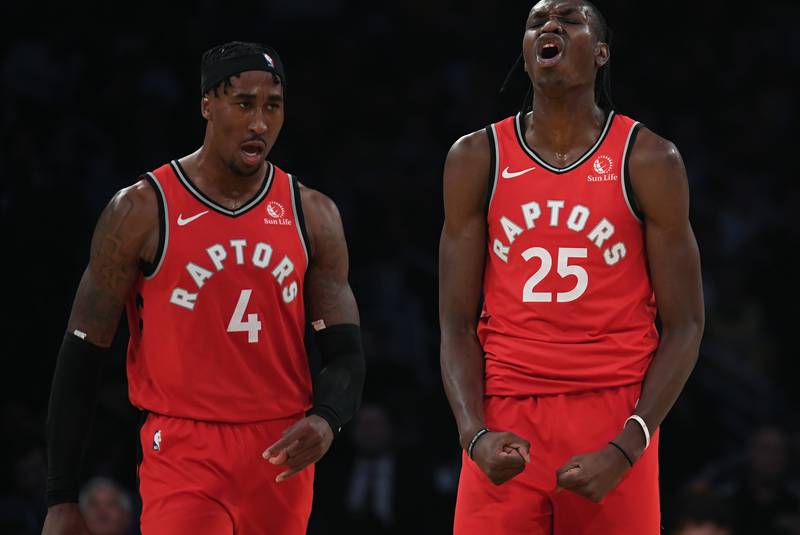 Thus far, three games into Raptors’ four game road trip, the team is taking the league by notice. Lowry, McCaw, Anunoby, and Ibaka have all been injured. Prior to this road trip, only 4 other guys were seeing the floor for over 10 minutes per game. That’s not even enough people to form a starting lineup. Obviously, it was time for Nurse to loosen his grip and give a longer leash to some guys, no matter how dissatisfied he was with them.

To all of our astonishment, we might be looking at the early phases of a Bench Mob 2.0. Chris Boucher, Rondae Hollis-Jefferson, and Terence Davis Jr., have all proved their value in the league, and have likely cemented a spot in the rotation moving forward. When this roster is fully healthy, Nurse will again have 10 able and reliable guys that he can turn to.

Over the past three games, this shorthanded Raptors defense has stepped up, holding LeBron James, Kawhi Leonard, and Damian Lillard to the following figures:

Seemingly, immediately after Nick Nurse built Kawhi Leonard’s stature to the point where he was being discussed as the best player in the world, he picked Kawhi apart, baiting him into a career-high 9 turnovers, and getting American national media to discuss if he’s finally revealed the blueprint on how to “stop” Kawhi Leonard.

Nick Nurse has been tremendous, but doesn’t deserve all the credit.

In this week’s span alone, Chris Boucher has had momentum-shifting blocks on each of LeBron James and Anthony Davis. Terence Davis Jr. has set a career high in points not once, but twice this week. Rondae Hollis-Jefferson has played every single possession like his minutes are on the line, and finished last night’s game with an efficient 16 points and 11 rebounds, including 8 offensive rebounds over the likes of Hassan Whiteside.

Lineups including two of these three guys have outscored opponents by a whopping 46.6 points per 100 possessions on the season, across a sample size of over 45 minutes. Unequivocally it’s unsustainable, but it’s proof of how exceptionally well these three have been playing.

Coming into the season, the main concern about Hollis Jefferson’s game was his well-known inability to shoot the ball from beyond the arc, which would make him hard to use in Nick Nurse’s 5-out system, as he wouldn’t be a threat at all from the perimeter. It seems like simple advice; but do what you can do, and don’t do what you can’t do. Rondae has yet to attempt a three-pointer all year, and that’s led to a 12.4% increase in his shooting percentage, which has been good enough to up his scoring average, whilst taking 2 less shots per game – something that is very rarely seen in professional basketball. He’s also countering Nick Nurse’s attempt to tarnish his defensive reputation, having served as the primary defender on both Kawhi Leonard and Damian Lillard during their worst games of the season. He’s representing a lot of what the Raptors hoped for when they signed DeMarre Carroll back in 2016, for a sixth of the price.

His frontcourt partner, Boucher, has been equally remarkable on the defensive end, averaging 4.1 blocks per 36 minutes, and holding opponents to 38.5% shooting. On the other end, he crashes the offensive glass relentlessly, resulting in 2 points almost every time he does. Standing at 6’9 and weighing a mere 200 pounds, he’s always smaller than the opponent he’s matched up against, but with a wingspan of nearly 7’4, he manages to punish his matchups on both sides of the ball.

In the backcourt, the undrafted rookie, Terence Davis Jr., is quietly making a case to be included in All-Rookie team discussions. Over the last three contests, Davis is averaging 11.0 points, 4.0 rebounds, and 2.0 assists, on 55% shooting from the field, and 54% shooting from deep, while seeing the court for just under 22 minutes per game. His consistent ability to put the offense on his shoulders when teammates are stagnant, knock down open threes, and bring energy and athleticism on defense is exactly what Masai Ujiri and Bobby Webster saw in him when they snatched him from the Denver Nuggets mid-Summer League. Thus far, he’s executing to a level higher than anyone expected of him, and seems to be improving game by game.

When this roster is fully healthy in about a month’s time, these three studs will likely have Norman Powell and Serge Ibaka join them on the bench, only raising the ceiling for this unit’s defensive ability, in addition to providing some leadership, maturity, and calmness on the court.

There’s a lot to be excited about what we’ve seen from the young guys so far, and it’s refreshing to see a bench again that looks like it can compete with any 5-man unit in the NBA. It’s a luxury that not a lot of NBA fanbases ever get to see, and right now it’s shaping up to be our second experience with a team this deep in just three years.