Media Day Highlights, And A Look Ahead To What We Can Expect From This Squad

After the shortest offseason in Raptors history, we’re back. Saturday’s media day in Toronto marked the transition from being NBA Champions to becoming defending NBA Champions. Even with the departures of the obvious, 9 players from last year’s championship squad are returning to rep the purple of the North in what seems to be the least stressful season of the past decade for this club. Despite the relief of pressure in the locker room, determination is burning strong. Everyone in the organization from the management, to the coaching staff, to the players are oozing with confidence, and in a conference that’s set up to be a bloodbath among the top 5 or 6 teams, confidence will be key. What we witnessed on Saturday was just the onset of one more unforgettable year of basketball, and after being deprived of content for months, we have no choice but to overanalyze. Here are some of the most telling quotes from the day:

Reporter: “How is your feeling going into training camp 2019-2020 compared to what it was this time a year ago?”

Masai Ujiri: “I can’t sit here and trade DeMar, then Kawhi leaves us and be upset.”

Preach it until the heavens shut up every remaining Clippers, Bucks, Sixers, Celtics, and Warriors fan, Masai. As soon as Kawhi made his late night decision in early June to take his talents back to the West, NBA Twitter had an outpour of Raptors slander. Among the things being said were that we should have kept DeMar, however with all due respect to the man who kickstarted the revival of the Toronto Raptors franchise, that take is absolutely preposterous. 101 times out of 100 any sane executive in the league would have made the exact trade that Masai Ujiri did (and would have probably given up even more), if they knew that it would result in a championship. Yes, Kawhi is in Los Angeles, but guess who’s still making their rounds around different towns in Canada? His name is Larry, and I’m not talking about Tannenbaum.

Reporter: “What are your expectations for the team?”

The only thing better than the words OG said was the way that he said it. Zero hesitation, and 100% confidence. While Vegas has the team at 1-33 odds of repeating, odds mean very little in a sport that has as many ups and downs as basketball. The parity in the league, and the determination of this team plays into the favour of the Raptors, so while the casual fan may doubt OG’s remarks, they’re not as ludicrous as one may think. This roster is significantly better than the 2016 team that took LeBron’s eventual championship team to 6 games in the Eastern Conference Finals, and with the looming improvements of many essential players (Siakam, VanVleet, Anunoby, Powell, Johnson, Hollis-Jefferson), the Raptors could easily be a darkhorse contender for teams to keep an eye on. 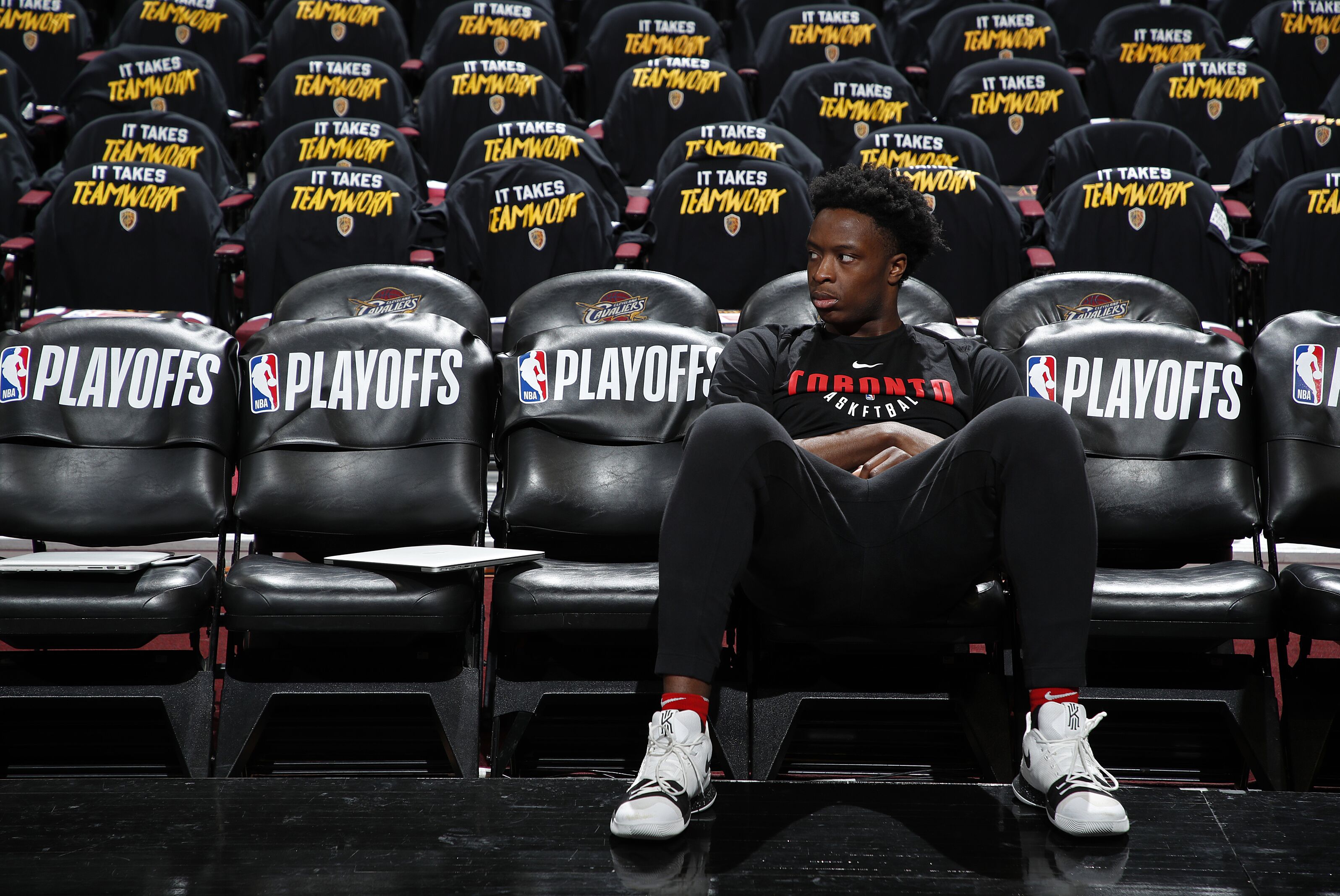 Reporter: “After last season, after the championship, after your summer, what are you looking to get out of this season with this team?”

As always, Kyle’s words are meaningful, because for most of us die-hard Raptors fans, we have achieved the one goal that we’ve been craving our whole lives, and as soon as the celebration died down and it finally sunk in that we were NBA Champions (if it even has sunk in yet), it begged the question, ‘what now?’ At the time, the championship felt like finding an oasis on the brink of death, but now it seems like the oasis was a mirage, and we need to seek that satisfaction again. With how Kyle puts it, you’re a child who tasted only one gummy bear. I dare anyone to find me a child who ever stopped eating candy after one bite. You can’t. You get a taste of it, and you want more. Similarly, you can’t find me one human in the country of Canada who witnessed what the championship did for our community, and doesn’t want to see it happen again. As Masai says, “you play to win”, and if you’re not trying to win at the highest level, then you don’t belong. So yes, we have one championship, but until we have umpteen, we’re going to keep chasing more.

Reporter: “Fred, you talked about if Kawhi left, you would have to go kick his ass. When you look at this team, you’re ranked 11th in the betting odds for a championship. How do you view this season as defending champions, but without Kawhi and without Danny?”

Fred VanVleet: “Same way I looked at it last year, you know obviously we’re not favourites. I think if Kawhi would have came back and Danny would have came back with the same team, we could have been favourites to win it, but I’m not sure how much that stuff matters. I think you’ve gotta go out there, you gotta lace ‘em up, you gotta put a lot of work in, you gotta stay really good and grow throughout the year, and towards the end of the year you gotta be playing some of your better basketball… and then, there’s 2 months from April till the end, and there’s gonna be ups and downs, we got blown out, we blew teams out, we had injuries… you know, it’s a lot of stuff along the way that goes into winning championships, so it’s not as cut and dry and people wanna make it seem.”

Perhaps this quote undermines the whole journalism and analytics side of basketball, but if it’s not true, then I have no idea what is. The first thing is that betting odds are driven by the people who are betting, so they’re really quite irrelevant in sports (aside from when OddsShark places the Raptors as favourites to land Kawhi). The second thing is that if sports could be predicted, we would all be rich and Vegas wouldn’t be, but they’re not. As Freddy explains, there’s injuries, ups and downs, and a whole lot of uncertainty. Nobody (and you’re lying, or you’re too much of a homer if you say you did) thought that the Raptors would advance to The Finals after going down 0-2 to the Bucks, but we did. While numbers might say that James Harden hitting a one-legged stepback as a left-handed shooter while fading to the right is improbable, he hits the shot anyways. Point being: Vegas placing the Raptors as 11th place favourites to win the 2020 title means nothing more than the fact that the North is still being overlooked.

The poise and spirit of this team is prepared to be put to their first test of the season early on Monday morning as they square off against a new-look Rockets squad featuring an all-MVP backcourt, in Tokyo, Japan. Until then, we can all stay locked on our phones replaying clips of every bit of training camp that we can get our eyes on.