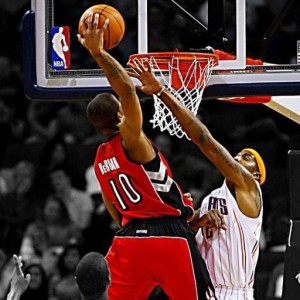 Out of conference road-trips are the most dreadful parts of seasons for every North American sports franchise. I highlight “North American” because you won’t see these kinds of trips in any other continent. On one hand, it makes our leagues unique. On the other hand, it kills the athletes mentally, physically and emotionally. Unfortunately for our beloved Toronto Raptors, they just recently endured one (and a somewhat painful one at that). It wasn’t all that bad, with the Raptors winning both their final games in the city of angels. However, it was a harsh beginning with three straight losses against Sacramento, Golden State and Utah. Only one of those 3 losses was expected on paper, but then again, the game isn’t played on paper is it?

The Raps began the season 5-0 with 2 victories against OKC and Dallas. However, then they would falter in Florida and the team’s flaws of poor execution in the fourth quarter began to come to light. I won’t divulge into that too much (there are other articles for that), but going into their 5 game Western-Conference road trip, the Raptors were not as hot as they were when they started the season, but still doing decently well. Another problem with Western-Conference road trips are the western conference teams themselves. In 2014, the eastern conference as a whole had an overall winning percentage of .432% whereas the western conference had an overall percentage of .567 (sports-reference.com). Sure, teams like the Lakers or the Kings are in the best of times right now, but they do play in an incredibly tough conference. It’s almost as if the level of basketball is much higher in one conference than it is in the other.

Now, the key to winning on the road is composure. Momentum can change in the blink of an eye due to the home team’s home-court advantage and their ability to feed off of the energy from their home fans. As demonstrated in all three road losses, the Raptors had a hard time of holding onto a lead late in the game (which is the opposite of earlier in the season when the Raptors got off to bad starts, but good finishes). Why is composure important? Because of the what happened to the Raptors in the first round of the 2015 NBA Playoffs. Not only did the Raptors lose the series, but they got swept, which demonstrates a significant lack of will and determination to succeed. Now sure, last year’s playoffs were a little imbalanced with some teams being unfairly seeded and others should not have been in the playoffs in the first place. However, with the new seeding system, composure becomes all the more important for every playoff-bound NBA team. The most clutch players in the league are those with the most composure. These guys have ice-cold water in their veins and they always seem to come up in big moments. While I doubt the Wizards would have beat the Raptors without Paul Pierce, it does not take a single player to lift a team in the playoffs, but rather the play of the team as a whole. Each and every player on the roster needs to have the confidence, desire and commitment to success. Playing on the road in the opposite conference for a significant amount of time is a good way to test whether or not a team has these attributes, but winning these games show that a team is at that level.

I think that the Raptors have indeed shown that they have what it takes to go deeper in this year’s playoffs. Although they faltered at the start, the Raptors finished strong with two superb victories against two relatively healthy Los Angeles basketball teams, and then came back home and beat the East’s best. Now nothing is certain. Anything can happen between now and April. Injuries can take place (For example, Jonas Valanciunas), there could be disconnect in the organization or team, heck I could be wrong and the Raptors could just suck the rest of the season. However, the signs are clear. The Raptors began well, overcoming their slow starts with strong late-game perseverance. Then we began to see their poor late-game execution and inconsistencies in both offense and defense. In this recent west-coast road trip we saw both of these sides. but both games in LA showed positive signs. The Raptors began to execute late in the game and scrapped and clawed their way to blowout victories. While at times it seemed as if they would give up momentum to this raucous LA crowd, a quick timeout and the Raptors seemed calm and refreshed. This is important because the playoffs are a whole different animal and if you want to win, you have succeed at blocking out all the noise. The best way to practice this is by winning on the road. In my opinion, the latest practice went well for the Toronto Raptors.

In conclusion, Western conference road trips can be incredibly damaging to one’s season or incredibly positive. If you have a team with good character and strong will (which I think this team has), then a West coast swing can bring a team together, as they are able to bond and become aware of whatever problems may exist in their game. Seeing as how the Raptors were able to win their last two games, I think they grew from this trip, but only time will tell if that’s true. Championship teams always win on the road, no matter what conference they face. Why? Because they have the composure and determination to win. At the same time, a long road trip, far away from home needs to demonstrate growth and progression. That way, everyone can determine whether a team has what it takes to win. Luckily for the Raptors, this is probably the worst road trip they will see this season.

1 thought on “Impact of the Early Season West Coast Swing”